Congratulations to all participants for their great performance during last Saturday´s Mini-Fotomarathon! It was the first true spring day, with lots of sun and great light, and it produced really great interpretations of the themes.

This Mini-Fotomarathon was an official partner event of the exhibition “Nervous System: quantified life and the social question”.  Nervous Systems  is an essay exhibition with artistic works, newly commissioned productions and contextualizing materials, organised by the Haus der Kulturen der Welt in collaboration with the Tactical Technology Collective, co-curated by Stephanie Hankey, Marek Tuszynski and Anselm Franke.

In a premiere -countering many years of closely guarded secrets around the Fotomarathon’s main theme- the motto of this mini-fotomarathon was inspired by the objects, installations and narrative of the Nervous Systems exhibition. To help participants get inspiration from the topic of the exhibition, all participants and their teams had free entry to the Exhibition.

Participants were challenged to photographically interpret six topics inspired by the narrative and art of the exhibition. The challenge was to be completed in five hours, with the topics first revealed on March 26. A specific sequence was to be observed and no post-processing was allowed. 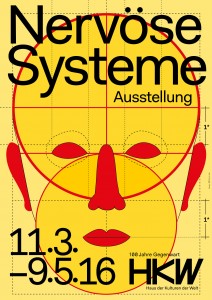 [The exhibition]  “Nervous Systems” is an invitation to reflect on how our experience and understanding of the “self” and the “social” are changing. The idea of a “nervous system” has become a chief motif to describe this proposed unification of life and technology; the organic and the machinic. Today, corporations speak of “smart nerves” and “synaptic real time connections” as managerial solutions to everything from government and business to natural ecologies. In the exhibition, a different notion of “nervousness” is being explored: the one that haunts todays’ systems and data-driven rationalities and ideologies.

Extract from the curatorial statement of the Exhibition “Nervous Systems”

The group of 34 participants and around 25 team members had 4 hours to interpret the six topics through photograps. Many went far away, to different districts in the city in the quest for the perfect place or detail to illustrate their vision to match the theme. We appreciate that and we were impressed with many of these interpretations -which we watched together as a slide show at the Haus der Kulturen der Welt. It was very interesting to compare how different photographers interpreted the same topics -and to see the reactions as we were all seeing them.

The people´s choice award had a clear winner: the series Nr. 592 from Andrew J. Kirkwood. He won a prize: a nice camera bag from Crumpler. Andrew documented his creative process in a very informative blogpost, which you can read here. Or you can click on Andrew’s photographic interpretation of the first theme “We are the product!”

An independent Jury will now see all the photos, and will choose one photo out of each theme -a total of six- which will be exhibited as part of our participation in the European Month of Photography festival, which will take place on Saturday 8th of October at the Gallery of Fotopioniere (Karl-Marx-Allee 87, Berlin Friedrichshain). We will also organise another mini-fotomarathon on that day.

The Jury will be formed by two of the curators of the exhibition “Nervous Systems”: Stephanie Hankey und Marek Tuszynski, who are also the founders and directors of the Tactical Technology Collective. Tactical Tech  is a collective of practitioners, technologists, and activists who work to demystify the politics of data in an international context. Since its founding in 2003, Tactical Tech’s work has supported thousands of activists, journalists, and human rights defenders worldwide to use information and technology in their work. https://www.tacticaltech.org

For the Mini-Fotomarathon, the six individual topics were:

You can download the sheet that was distributed during the Fotomarathon as PDF by clicking on the image to the right or on the link below:

Here are some impressions of the day -please click on the photo below to open the photo-gallery. 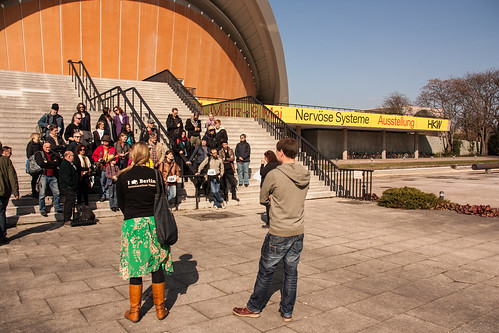 After the Fotomarathon, before the exhibition

After the Fotomarathon, before the exhibition